In the past, most of us had interactions with chatbots that were far from satisfactory, leaving us to figure out the issues some other way. However, today’s AI chatbots can have full-blown conversations that leave people feeling like they just finished talking with a living person. Let’s have a closer look at how conversational AI text messaging works.

In the early days of chatbots you would, for example, have to type in 'yes' or 'no', and if you didn't do exactly as asked, you would get lost in a loop of asking the same question over again or it just went down a rabbit hole that you couldn't get out of. 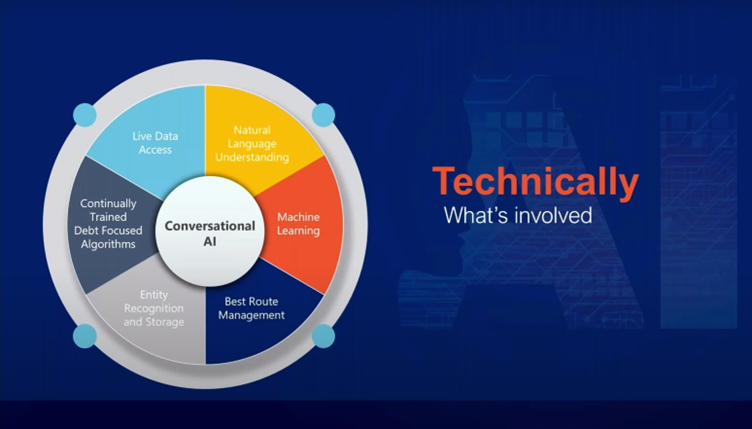 The technology behind conversational AI messaging

Conversational AI is a form of artificial intelligence that is powered by a combination of technologies used to create systems that can carry out conversations with humans, including:

In practise, conversational AI combines NLU and NLG to allow humans to interact with computers in the same way they would with another human being and likewise machines to understand and respond to humans in a more natural and life-like manner.

Conversational AI works by first analysing the text input from the user which is then parsed and classified using NLP algorithms. These algorithms allow the AI to identify what the user is trying to say and determines the context of the conversation.

NLU is used to interpret the meaning of text, to identify the intent behind words and to pick up the context of a conversation.

NLP is used to identify and extract information from text.

NLG is how the computer generates meaningful responses.

Best Route Management is understanging which is the best path to take a customer down in the conversation: is it to an automated process, a transaction, a live agent, etc.? This will depend on many factors, such as the time of day and the intent behind the customer query.

Entity Recognition and Storage is picking put key pieces of information from within a longer conversation with a customer who is communicating in paragraphs in natural language and not in the short form formats of how entities are stored in a database. Examples of entities are dates, dates-of-birth, amounts, postal codes, etc.

Continually Trained Algotithms are trained for a specific task, such as debt collection. Over the years, the system has looked at millions and millions of utterances and outcomes of conversations in the debt collection space and built algorithms around that, so the best routing and the best outcomes and the best response lines will come from the body of learning.

The bot might also use an Application Programming Interface (API) integration to access data about the customer and their transactional history. The response is then generated using a combination of NLP and ML algorithms.

API is an important tool to create a more personalised and accurate customer experience. By connecting an external system to a conversational AI agent, customers can interact with the system in a more natural way and receive more useful information.

For example, someone calls in and makes a payment over the phone, but you send a message out via Whatsapp to ask for payment without knowing this. If you can't access live data, it is awkward to ask the customer for the payment when they've just made it five minutes ago. So having that live access is really key to a good customer experience.

The Turing Test was named after the British mathematician and computer scientist, Alan Turing, who is considered one of the fathers of modern computing and he made significant contributions to the field of artificial intelligence.

Turing proposed the concept of the Turing Test in 1950 in his paper "Computing Machinery and Intelligence," in which he argued that it was possible for machines to show intelligence. In the paper, he described a hypothetical scenario in which a person has a natural language conversation with a human and with a machine and then decides which of the two they are communicating with.

If the person is unable to distinguish between the human and the machine, then the machine is said to have achieved a level of intelligence equivalent to that of a human. The Turing Test has been influential in the field of artificial intelligence but it is just an hypothesis. While some conversational AI platforms have been able to 'pass' the Turing test in limited ways, most are not yet able to do so convincingly. The ability of conversational chatbots or messaging systems to simulate human-like intelligence is, however, improving at a rapid rate.

It's important to note that the Turing Test itself has been criticized by many AI professionals as being flawed as it only measures the ability to mimic human-like language, rather than having actual intelligence in itself.

Examples of where conversational AI is used

Conversational AI is increasingly being used in applications that require Natural Language Understanding. This technology is often used to provide customer service, automate mundane tasks, and to give personalised customer experiences.

One of the areas where conversational AI excels is in customer engagement. AI chatbots are used to provide customers with quick answers to their questions and to help them complete transactions.

According to a report from MIT Technology Review, nearly 90% of those polled reported that they have recorded measurable improvements in the resolution speed for complaints, and over 80% reported improvements in service delivery, customer satisfaction, and contact centre performance.

For a better understanding, here’s an example of what conversational AI in debt collection might look like:

AI chatbot: I see that you missed your last payment. Is there something I can help you with?

Customer: I am struggling to make ends meet as my wife has lost her job.

AI chatbot: I am sorry to hear that. Would you like to set up a payment plan to help you manage your debt?

Customer: Yes. How do I do that?

AI chatbots are also being used to automate mundane tasks such as checking account balances and making payments. By automating these tasks, customers are given an improved customer experience and companies can save time and money.

Another benefit is that conversational AI is used to provide real-time analysis and insights. AI chatbots analyse customer conversations in order to gain insights on customer behaviour and preferences. This allows companies to better understand their customers and make more informed decisions about their products and services.

Conversational AI is becoming the go-to way of engaging with customers. As the technology continues to evolve, interacting with bots will not only be a smart business move for companies, but a smooth experience for customers as well.

For a more in-depth look at the
Benefits of Conversational AI, download this guide.